For older students who have trouble reading, school is not just a struggle, it’s a nightmare! How can they DO the reading that’s required? If they can’t pronounce the words in their textbooks, why even try to read a whole chapter? The Word Identification Strategy enables students to decode unknown words with lots of syllables, the kinds of words they see in their textbooks. The strategy is based on the premise that most words in the English language can be pronounced by identifying prefixes, suffixes, and stems, and by following three easy rules.

This book contains graded reading passages that students can use to practice the Word Identification Strategy. Each passage contains 16 multi-syllable challenge words that students can decode using the Word Identification Strategy. Six passages (three expository and three narrative) are included for grade-level readabilities from grades 4 through 10. Each passage has an associated six-question quiz. This teacher’s edition has detailed answer keys showing how the words are to be decoded plus answer keys for the quizzes.

Prerequisites: Instruction in the Word Identification Strategy is best suited for students decoding at or above the fourth-grade level. However, it has benefited students who were decoding at the third-grade level. Be sure to purchase the Word Identification Strategy Instructor’s Manual from the CRL. Note that the Student Edition of this book is a shorter book and does not contain answer keys for the quizzes and the decoding.

Research on the Word Identification Strategy

Study 1
Overview
The Word Identification Strategy is comprised of a set of steps students use to decode multisyllabic words, like the words they find in secondary science and social studies textbooks. Twelve students with LD in grades 7, 8, and 9 participated in this study. At the beginning of the study, their reading scores on a standardized test ranged from the third to seventh grades. The study employed a multiple-baseline across-subjects design. All participants were taught the strategy.

Maintenance tests taken as many as five weeks after instruction had ended showed that the students maintained their use of the strategy and continued to commit fewer oral reading errors than they had before instruction.

Study 2
Overview
The purpose of this study was to evaluate the effects of instruction in the Word Identification Strategy on a diverse group of adolescents, some of whom were eligible for special education services. Two matched groups of 62 ninth graders who attended two matched high schools and who had earned decoding scores of two or more grades below their grade level on a standardized decoding test, were involved. Included in the experimental group were 11 students with LD. Many of the students were living in poverty. Both groups included African Americans and Hispanics, as well as Caucasians. The experimental group received instruction in the Word Identification Strategy for 4 to 8 weeks, depending on how much time was required for each student to reach mastery. Students were pulled out of their language arts classes in small groups of 4 to 6 students for the instruction for one hour per day until they met mastery. The comparison group received traditional reading instruction during the school year. All students were tested at the beginning and end of the study using the Slossen Diagnostic Battery (Gnagey & Gnagey, 1994) to obtain a decoding score. 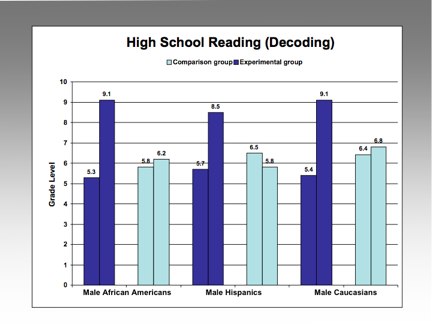 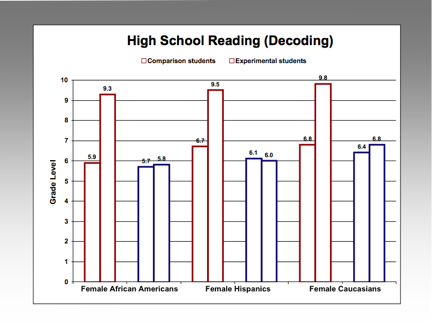 ANCOVA results indicated that there was a significant difference between the posttest raw decoding scores of the experimental and comparison groups [F(1,121) = 31.078, p <.001, η2 = .692] when the pretest scores served as the covariate. (This represents a large effect size). In addition, there was a significant difference between the posttest scores of students with LD in the experimental group and the posttest scores of comparison students who were matched with the students with LD in the experimental group on the basis of their pretest scores [F(1, 19) = 29.673, MSE = 43.93, p < .001, η2 = .610]. (This also represents a large effect size.) However, the most significant finding was that, at the end of the study, the students in the experimental group were decoding, on average, at the ninth-grade level, their actual grade level. The experimental students with LD were decoding at the high eighth-grade level (8.8), very close to their actual grade level. The results for all subgroups of students representing all the minorities, mirrored the results for the whole groups. Furthermore, the authors reported that the same kind of results have been achieved by the school decoding program for eight years running. (See Figure 3 where the blue bars represent pretest scores and the maroon bars represent posttest scores.) 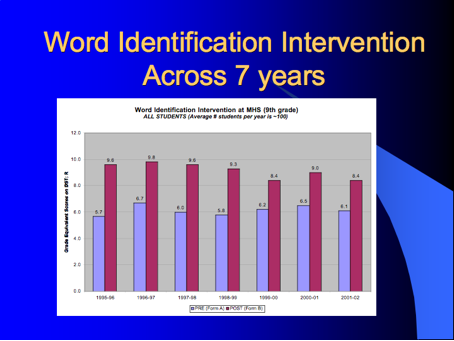 Conclusions
Instruction in the Word Identification Strategy, when implemented with small groups of students in an intensive way, can result in “closing the gap” for them with regard to being able to decode multisyllabic words at their grade level. Substantial increases were achieved with all subgroups of students including students with reading disabilities. Comparison students did not make gains in decoding.

Reference
Woodruff, S., Schumaker, J. B., & Deshler, D. D. (2002). The effects of an intensive reading intervention on the decoding skills of high school students with reading deficits. (Research Report No. 15). Lawrence, KS: University of Kansas Center for Research on Learning.